The cemetery was originally part of the Utoy Primitive Baptist Church, but in 1984 was deeded to the Utoy Cemetery Association, Inc. 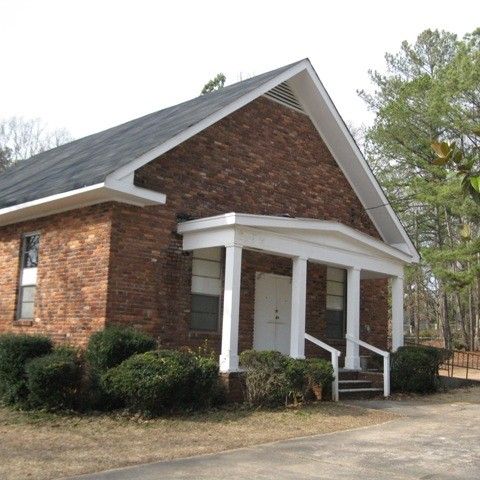 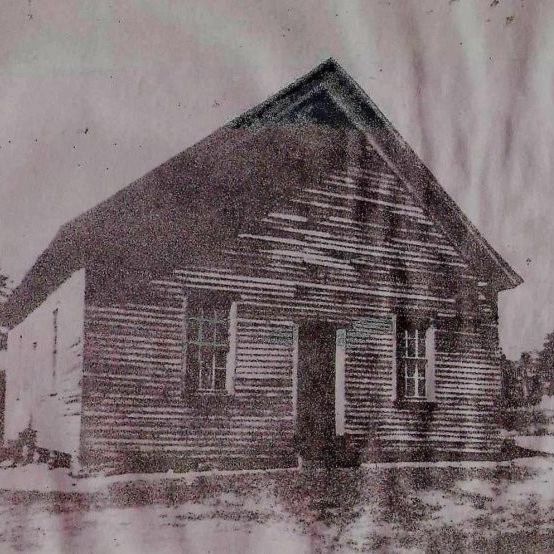 Utoy Church in 1949-Before Modifications

A Brief History of Utoy Settlement and Church

Atlanta’s historic Utoy Cemetery is a fenced three and a half acre suburban cemetery located  at 1465 Cahaba Drive SW, Atlanta, Georgia 30311, behind the old Utoy Primitive Baptist Church (now the Temple of Christ Pentecostal Church), 1911 Venetian Drive SW, Atlanta, Georgia 30311.  The cemetery was originally part of the Utoy Primitive Baptist Church, but in 1984 was deeded to the Utoy Cemetery Association, Inc.

Utoy Primitive Baptist Church, apparently the oldest Baptist Church in present Fulton County, was constituted August 15, 1824, in a log house just west of the present church, which is now located at the corner of Venetian Drive (originally Utoy Road) and Cahaba Drive, in Southwest Atlanta. The church was apparently moved to its present location in the summer of 1828. Today, the Utoy Church building itself is owned by the Temple of Christ Pentecostal Church, Inc., an organization that has an active African-American congregation of approximately 100 members.

This location is about 6 miles from the State Capitol in Atlanta, and the Utoy Church has apparently been used for burials from 1816 until 2006. The cemetery contains inscribed tombstones from 1816 to 2006 and is associated with the earliest period of European-American settlement (1810s-1870) in what is now Fulton County, Georgia. Utoy Cemetery is the oldest of the few identifiable properties to survive from that period.

A number of slaves, who were also Utoy Church members, are buried in the western portion of the cemetery, along with at least two Revolutionary War veterans.  Moreover, there are Confederate, War of 1812, World War II, Spanish-American War, and Vietnam conflict veterans, plus Atlanta’s first physician buried in Utoy Cemetery.

During the 1864 Battle of Utoy Creek, Utoy Church served as a military field hospital for captured Union and wounded Confederate soldiers. There are at least twenty-three (23) unknown Confederate soldiers, from Gen. S.D. Lee's Corps of Bate's Division, buried at the Utoy Cemetery. These were among the 35 Confederate casualties of the Battle of Utoy Creek, who died from wounds treated at the Utoy Church field hospital.  One additional known casualty of this conflict and eleven (11) known other Confederate veterans are also buried at Utoy. Additionally, a portion of the Rebel defensive line still exists, only a few feet north of the Confederate graves.

The primary surgeon during the battle, and at the Utoy Church field hospital, was Dr. Joshua Gilbert, who was assisted by Miss Sarah Hendon as a nurse, and other volunteers from the area.  Both Dr. Gilbert and Miss Hendon are buried in the Utoy Cemetery with DAR and UDC memorial recognition.

Dr. Gilbert was Atlanta's first doctor. He was born in 1815 in South Carolina and was graduated from the old Augusta Medical College in 1845 and then came to Atlanta. At that time, Atlanta was called Marthasville and was located in DeKalb County. Here Dr. Gilbert practiced medicine until his death in 1889.

A Colonel James S. Boynton, commanding the 30th Georgia Infantry of Brigadier General H. R. Jackson's Georgia Brigade, was treated here after being wounded at the Battle of Utoy Creek, one mile Northwest of Utoy Cemetery, along what is now Cascade Road SW. Colonel Boynton later became President of the Georgia Senate and, on March 5, 1883, the day after the death of Governor Alexander H. Stephens, he became of Governor of Georgia, to serve until a special election could be held.

A week after Colonel Boynton’s wound and treatment, his division commander, Major General William B. Bate, was treated here (10 August 1864) from wounds received at the Battle of Utoy Creek, and was evacuated to Barnesville, Georgia to recuperate.

Union casualties were interred here until 1866, when they were moved by the US Quartermaster's Office at Atlanta, to the National Cemetery in Marietta, Georgia.

The Battle of Utoy Creek was a major victory for the Confederates and a terrible loss to the Union Army under Sherman.  Sherman’s original plan for capturing Atlanta, poorly executed as it was by Schofield, forced Sherman into an unwinnable siege war.  Total U.S. Forces amongst the two corps in killed and wounded were a little less than two thousand troops.  The Confederates losses included 35 killed and two hundred wounded or captured.

The significance of the Battle of Utoy Creek has long been underemphasized by historians, because General Sherman underreported his battle casualties and battle failures to Washington, so as not to impair President Lincoln’s re-election chances.  It was only after General Sherman outflanked the Confederate Army to the south of East Point, and cut the railroad ties at Jonesborough, that he secured a Union victory in the Battle of Atlanta, thus ensuring President Lincoln’s re-election, and the fall of the Confederacy.

The Georgia Historical Commission has placed a marker near the Corner of Venetian Drive and Cahaba Drive in SW Atlanta signifying the importance of the Utoy Church and cemetery: The DAR and the UDC have marked and improved both Revolutionary and Civil War graves.

The Utoy Church and Cemetery are part of a popular driving tour of Civil War historical markers, starting at the Battle of Ezra Church and Westview Cemetery Markers, then to Utoy Church, and on to the Surrender, Fort Hood, and Change of Command Markers.

This site uses third-party website tracking technologies to provide and continually improve our services, and to display advertisements according to users’ interests. I agree and may revoke or change my consent at any time with effect for the future.
More

This tool helps you to select and deactivate various tags / trackers / analytic tools used on this website.